The layers of the skin, the cells and the exfoliation. 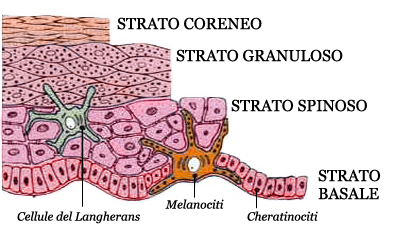 The epidermis is the more external layer of the skin: is formed by five sub-layers and every carries out very important activities. The epidermis, formed of cells called keratinocytes, is the area in which the protocols concentrate on dermatology, aesthetic medicine and the professional aesthetic. 1° germinative layer or basal layer, located directly above the dermis. Its role is to establish the model of the physiological behavior of the entire epidermis. Its cells are constantly subjected to mitosis, that is to cell division. In this layer there are two types of proliferative cells: the melanocyte and hemidesmosome (adhesion cells) placed side by side Merkel cells, true and correct sensory receptors. 2° spinous layer, located directly above the germinative layer. Here, the cells undergo a cell differentiation: their nucleus begins to crack and leads to have a thorny look. In this layer there are also the Langerhans cells, important for the immune system. 3° granular layer, located directly above that spinous. At this level occurs the completion of the synthesis of keratin (keratinization). Here, the cells are no longer called keratinocytes but corneocytes. The rupture of the cells stimulates the formation of lipids useful both as a barrier, either as adhesive substance called “acid mantle” which is located above the granular layer. Its structure creates a pH acid that prevents the passage of foreign substances into the skin and the proliferation of bacteria. 4° glossy layer is formed by cells called “clear” for their translucent appearence. They lie in abundance on the palm of the hands and on the sole of the feeet and are very thin. 5° stratum corneum, is the outermost and is composed of hard, thick, flattened and keratinized cells, have surfaced from the granular layer waiting to be removed from the skin surface.